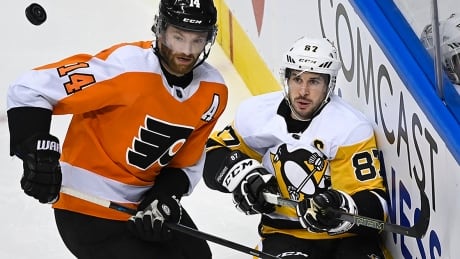 Pittsburgh Penguins star Sidney Crosby will miss Tuesday night's game against Philadelphia after being placed on the COVID-19 protocol list.

Get the latest Pittsburgh Penguins news

NHL Live recaps some of major deals at the 2021 NHL Trade Deadline, including Taylor Hall to the Bruins, Jeff Carter to the Penguins, Nick Foligno to the Maple Leafs, David Savard to the Lightning, and more...

The most commonly used word around the LA Kings over the past 24 hours has been bittersweet. With Jeff Carter being traded to the Pittsburgh Penguins late Sunday and then Alex Iafallo signing a contract extension about an hour before the NHL Trade Deadline on Monday, many have been on an emotional roller coaster. Following […]

Fresh off his trade to the Penguins, Jeff Carter reminisced with Sidney Crosby about their classic battles in rivalry games back when he broke into the NHL with Philadelphia. Now Carter can't wait to play against the Flyers, but not because he harbors some ill will a decade after they ...

Carter Can't Wait to Get Going with Pens

Jeff Carter will likely make his Penguins debut on Thursday against the Philadelphia Flyers.